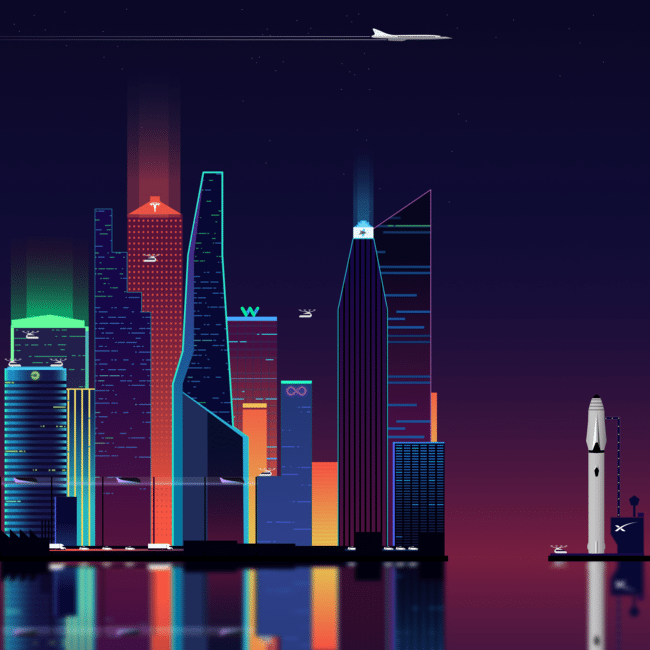 Human beings are embarking on the dawn of a transportation renaissance. In the past five years, multiple evolutionary and revolutionary transportation products surfaced with the potential to dethrone incumbent businesses and reshape our planet.

Each novel transportation product promotes a combination of environmental, energy, and time savings. Four areas where design, engineering, and product teams are focusing their efforts are intracity, intercity, international, and interplanetary.

Traveling between two points within a city

Self-driving vehicles range from cars to busses and shuttles. The self-driving revolution promises to save time by reducing traffic and increase safety by creating automobiles with super-human driving capability. This technology isn’t as far along as bike-sharing but has seen a significant uptick in visibility since the summer of 2016.

This product is relatively nascent, but is experiencing a lot of exciting innovations. VTOL involves creating a drone-like helicopter with multiple smaller rotors. This design reduces noise and increases safety over traditional helicopters while maintaining the benefit of being able to take off and land anywhere.

The Hyperloop is another fascinating technology proposed by Elon Musk in a white paper on August 12, 2013. The Hyperloop propels a small pod through a vacuum sealed tunnel at speeds of up to 800 MPH. Minimal air resistance allows pods to achieve speeds as high as twice the speed of commercial airplanes but Hyperloop trips are limited to a few hundred miles.

Self-driving trucks facilitate the movement of goods. A report from the American Trucking Associations says more than 70 percent of goods consumed in the U.S. are moved by truck. Loads can be placed on a self-driving truck at one location and dropped off hundreds of miles away without human intervention.

Traveling between two or more nations

Supersonic aircraft travel faster than the speed of sound which is 343 meters per second or Mach 1 (767 mph). Boom’s jet is designed to fly at Mach 2.2 (1688 mph). At that speed, you can travel from New York City to London in 3 hours and 15 minutes.

Hypersonic aircraft travel faster than Mach 5 (3836 mph) and SpaceX has come up with an interesting way to take advantage of the its reusable rockets. SpaceX proposes using the BFR to send humans anywhere on the globe in under an hour. The BFR is so fast that it reduces the transportation from New York City to London even further than Boom to only 29 minutes.

Traveling between two or more planets

This is probably the most awe-inspiring transportation renaissance products which involves sending Humans and supplies into space allowing us to become a multi-planetary species. There aren’t really any incumbents in this space (get it), but multiple nations have space programs that build and launch rockets.

Creating Ephemeral Gestures On iOS8 # Last week, Apple announced the Watch and one of the features I was really interested in was the gesture based communication tool which lets people sketch an ephemeral message to other Watch users. I... Continue →